Create an Account - Increase your productivity, customize your experience, and engage in information you care about.

This is awarded to who shows the most productive performance and leadership skills of the graduating class. The students themselves vote, then the Academy instructors vote on who best exemplifies the most outstanding rookie.

Academic Achievement Award
This is awarded to the individual who clearly showed hard work and dedication by obtaining the highest grade point average of the graduating class.

The Fire Department’s highest award, awarded to a firefighter who distinguishes themselves conspicuously by an act of heroism at the risk of the firefighter’s life, above and beyond the call of duty, while engaged in the mediation of an emergency situation.

This is awarded to a firefighter who is cited for various acts of heroism involving the risk of life. The act must be in excess of normal demands of duty, and of such a nature to involve serious and imminent threat to the safety of the public or fellow firefighters, but to a lesser degree than that required for the Medal of Honor.

This is awarded to a firefighter who is directly responsible for the saving of human life from fire, water, hazardous materials, or a condition that clearly places the individual’s life in danger and they are unable to rescue themselves.

This is awarded to a firefighter for exceptional meritorious service. It may be issued for work performed under unusual, complicated, or hazardous conditions or for work of exceptional quality.

Awarded to a unit such as an engine or truck company, fire station, ambulance crew, or other group of individuals recognized as a unit within the fire department organization who have performed an act or acts of outstanding and distinguished service.

Awarded to an individual for outstanding performance and dedication to the Jacksonville Fire Department.

This is awarded to members of the general public for actions that greatly assisted in the saving of human life. It may include actions by civilians who render medical aid to seriously ill or injured victims.

Firefighter of the Year

Paramedic of the Year 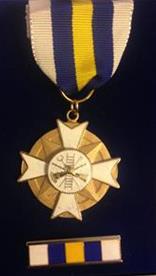 Fire Officer of the Year

Jr. Fire Officer of the Year

EMT of the Year