In 1941 the City of Jacksonville had a population of about 100 people. The city was protected by two fire stations. In 1941 this was a lot of fire protection for a town with such a low population. The fire stations were actually for the Arkansas Plant (AOP). The AOP employed more people than actually resided in Jacksonville.

The fire department was staffed with eighty-five men that worked eight-hour shifts. The firefighters stayed busy handling the numerous fires that occurred at the AOP. When the first fire trucks arrived in Jacksonville, they were painted army green. Chief L.A. Pluche convinced the AOP to paint 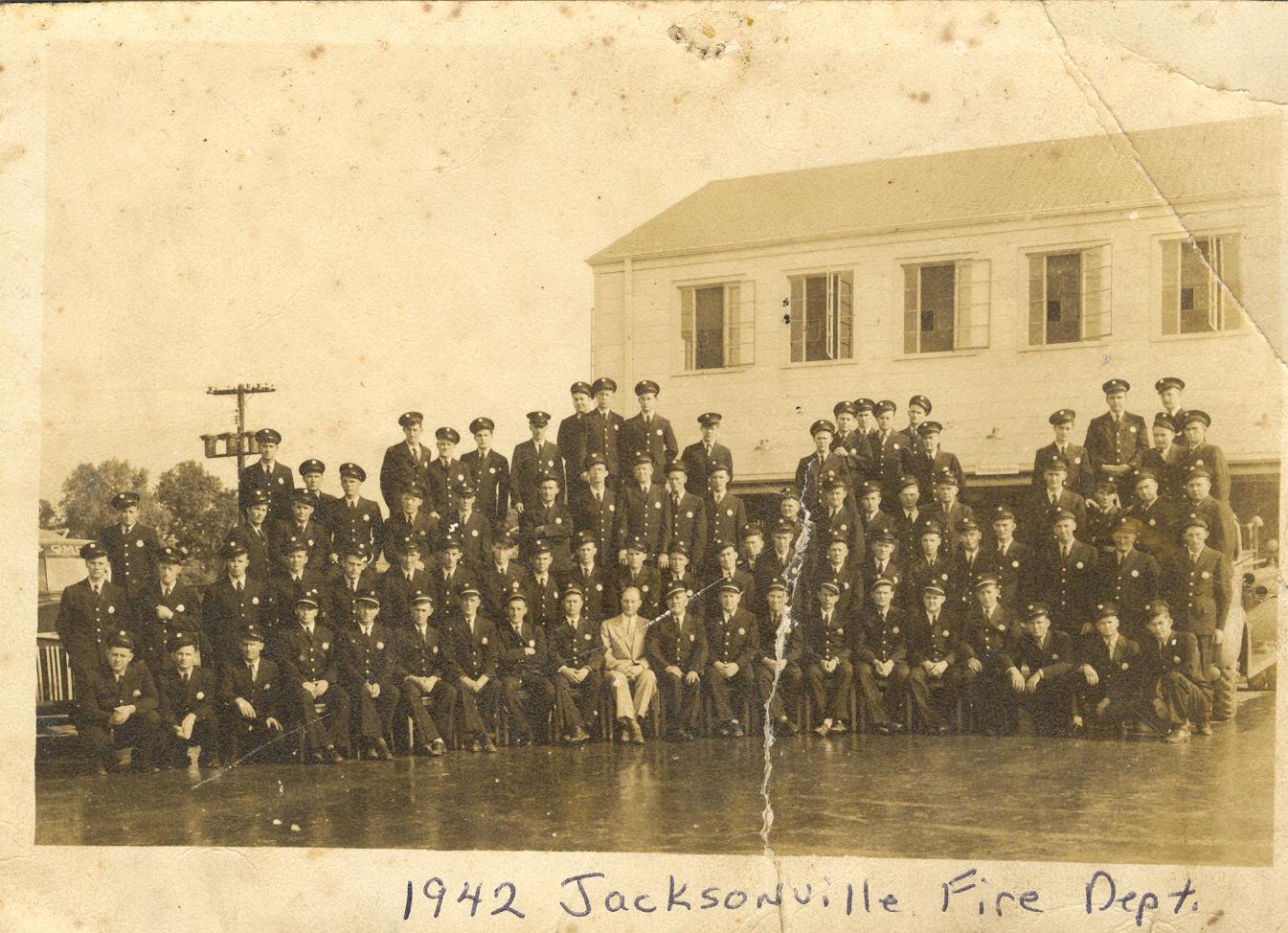 When the United States entered World War II, most of the men went off to fight. Because of the cut in manpower, the department adopted a twenty-four-hour shift. During the next seven years, the AOP continued to provide fire protection for the citizens of Jacksonville.

When the war was over the AOP was handed over to the U.S. Army Corps of Engineers. This resulted in the manpower at the fire department being reduced further. The department became a volunteer department with only five full-time members.

Redmond Motors of Michigan purchased the entire ordinance plant in 1948. As part of the purchase, Redmond also took over the fire department. Redmond paid the firefighters' salary and continued to provide fire protection for the town.

Lewis Hamlin of Redmond Motors made a deal with the city. Redmond would donate the fire station and equipment to the city. In return, the city would pay the firefighters and maintain a class 6 ISO rating for fifteen years.

The deal was concluded in 1949 and H.S. McClung became the first fire chief for the Jacksonville Fire Department, for the city of Jacksonville. Unfortunately, Chief McClung died while serving as chief. His term was from 1949-1950. 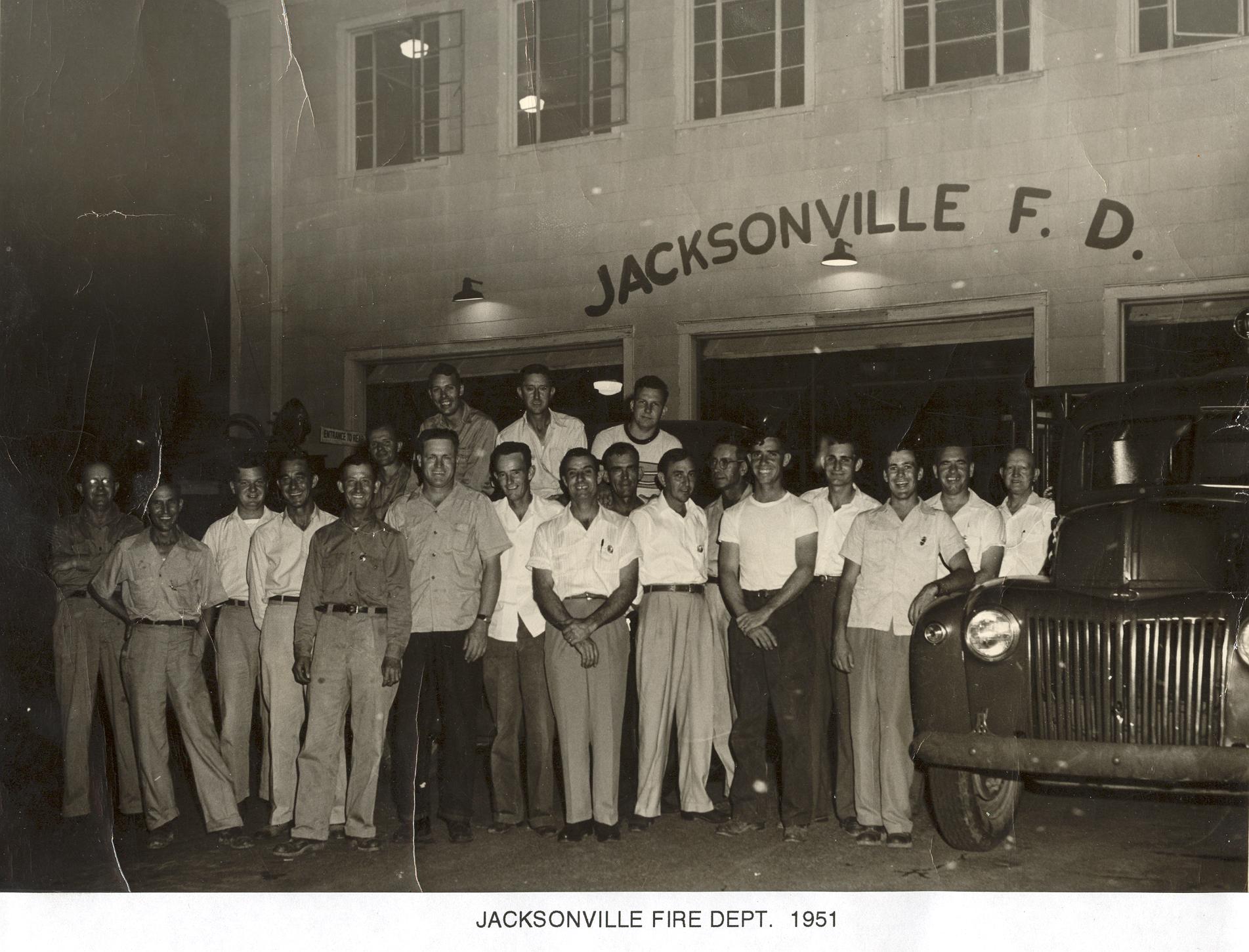 Not only did the department respond to fire calls, now the department staffed two advanced life support ambulances. This required more personnel and the members had to be trained in firefighting and EMS.

When Wilbur Smart was a firefighter, on June 14, 1968, he responded to a structure fire in the Sunnyside edition. Upon he was met with a structure fire that had heavy fire and smoke showing. Bystanders informed firefighter Smart, three children were still inside the structure. Two previous rescue attempts had failed. Firefighter Smart with the assistance of firefighter Charles VanNostrand entered the structure without a charged hoseline and managed to rescue all three children. The children were revived at the scene and transported to Rebsamen hospital.

In 1986, Chief Smart retired and his assistant chief, Rick Ezell was appointed fire chief. Under Chief Ezell's the department did some serious growing, the department experienced new construction, the addition of an aerial truck and the personnel to staff the truck. The department was able to reduce the ISO rating to a three, saving citizens and companies within the city money on insurance premiums. Chief Ezell retired in 1998.

John Vanderhoof served in the U.S. Marines during Vietnam. After his tour in the Marine Corp, John was on his way to apply for a job at Remington Arms. He decided to stop by the fire station and the next thing he knew, he was going to work as a firefighter. John Vanderhoof became Fire Chief in 1998.  Chief Vanderhoof has contributed several ideas and traditions that will carry on in the department for decades to come. The department was able to reduce the ISO rating to a two in 2011. Chief Vanderhoof retired in February of 2013.

Chief Alan Laughy was appointed Chief of the Department in March of 2013. Alan Laughy is a retired Assistant Fire Chief and Training Chief from the Little Rock Air Force Base Fire and Emergency Services. He started his career by enlisting in the United States Air Force in July 1989 to become a USAF Crash Fire Rescueman. He served almost 11 years in the Air Force and was assigned to bases in Wichita, Kansas; Shemya, Alaska; Plattsburgh, New York; and Little Rock AFB Fire Departments. He served in Desert Storm providing specialized fire and EMS rescue support for various flying missions with the F-4, F-16, and the B-52 bombing campaign of Iraq. He also served in deployments to Arab Emirates; Fairford AFS, England; and Joint Base Soto Cano, Honduras. Chief Laughy separated from military service honorably in April 2000 and was hired as a Fire Lieutenant, Department of Defense Crash Fire Rescueman at Laughlin Air Force Base, Del Rio, Texas. He was promoted to Captain eight months later and transferred to Little Rock A.F.B. Fire and Emergency Services in December 2000. In 2010, Chief Laughy was promoted to Assistant Chief in charge of the Training Division full time, and part time Operations Chief. Chief Laughy is the current Chief at the time of this printing.

The Jacksonville Fire Department has a reputation as being one of the best departments in the state of Arkansas. Members of the Jacksonville Fire Department have competed in EMS competitions on the state and national level, bringing home awards for their professionalism and abilities. The department has been called upon for their services on special operations, such as providing equipment and manpower for the use of NASA and the space program. The Little Rock Air Force Base is a scheduled stop when transporting the space shuttle cross-country. The department's ladder truck has been requested to gain access to the space shuttle for inspection and maintenance while in transit.